The motives to replace clinker with supplementary cementitious materials (SCM) are well known. However, granulated blast furnace slag, natural pozzolanes, qualified fly ash and further SCM have a limited availability; the total potential replacement of the global clinker production is less than 30%. Limestone is increasingly being used as a component in Portland-Limestone cements: Sika offers an additive to enhance grinding and performance.

Limestone has a rising recognition as a supplementary cementitious material (SCM) thanks to the following advantages:

In many European countries (e.g. Italy, France, Switzerland) portland-limestone cements (PLC) are broadly accepted and have reached a market share of much more than 60%.

Nowadays these cements are not only used for the production of inferior concrete classes but can be accredited for concrete of many exposition classes according EN 206-1. Limits are often set due to marketing policy, tradition or special applications.

After an extensive review of research data and based on European and Canadian experience, the standard Committee revised ASTM C595 and introduced in 2012 the cement type IL with a limestone content up to 15%. It was found that portland-limestone cement (with 15% limestone) achieves equivalent concrete strength and durability to Ordinary Portland Cement.

The mechanical strength of portland cement (PC) cannot be compared with portland-limestone cement without a discussion about the fineness of clinker and limestone. Is it correct to compare a PC with a PLC with the same specific surface (Blaine), with the same sieve retention or with the same particle size distribution?

Even if it would be possible to produce portland cement and portland-limestone cement with an identical particle size distribution (PSD), it has to be considered that the laser method is based on the assumption that all particles have a spherical shape, which neither ground limestone nor clinker really have.

As limestone is much easier to grind than clinker, the fine limestone particles enrich the PSD segment where clinker is less present.1, 4  Therefore the filler effect (dense particle packing), the faster precipitation of dissolved hydrates on the higher surface and further effects can improve the mechanical strength of PLC up to a limited content of limestone. This limit depends on the quality of the ingredients and further parameters: an addition of 5% is on the safe side.2

In practice, portland-limestone cement is ground to a higher fineness compared to portland cement. An increase of Blaine in the range of 100cm2/g is necessary to compensate for the strength reduction resulting from the addition of 1% limestone.3

The mill type and process system play an important role. Intergrinding (co-grinding) in classical ball mills (closed system) leads to a broad PSD, which is usually regarded as beneficial, e.g. regarding workability. Nevertheless, above a certain limit the fine limestone has an excessive water adsorbtion and separate grinding (ball mill and  mixing equipment) is favoured.4

The production of PLC with a Vertical Roller Mill (VRM) is advantageous. A comparison of two cements (CEM II/A-LL 42.5), one ground with a VRM and the other with a ball mill, shows a good performance of the VRM. The fineness parameters clearly indicate that the VRM can produce a higher fineness of the clinker without ‘overgrinding’ the limestone.

Obviously the comparison is not thoroughly correct because clinker, gypsum and limestone come from a different provenance, but both cements have the same limestone content of 17-18%.

In Figure 1a, both PSD graphs show the typical ‘shoulder’ (range 1-10μm) coming from the limestone. The clinker in the ball mill is clearly less ground than in the VRM, which will result in lower mechanical strength. Although the VRM grinds the clinker to a higher degree, the fineness of the limestone is not increased proportionally.

Figure 1b: Fineness parameters of two cements with the same limestone content.

Figure 1b shows fineness parameters of two cements with the same limestone content. The particle size distribution as well as the sieve residue clearly indicates that the high fineness is not only due to limestone but also to well-ground clinker.

Strength enhancers, based on alkanolamines for example tri-isopropanolamine (TIPA), are widely used in PLC. The effect of TIPA comes from ironchelation which enhances the dissolution of C4AF, thereby increasing the alite surface area. Different mechanisms, including the increased formation of carboaluminates and the influence of the grindability of the minerals are discussed.5

The performance of strength enhancers not only depends on the clinker and cement composition but also on the cement fineness. The influence of fineness on the efficiency of two alkanolamines (A and B) was tested with two different portland cements which were ground in the laboratory ball mill of Sika Technology AG (see Figure 2).

Figure 2: Performance of two strength enhancers (A and B) in function of cement fineness, on six cement samples.

Higher levels of limestone addition require a high specific surface area to compensate the strength loss. Strength enhancers can mitigate the challenge between mechanical strength and workability to a certain extend. Another concept is the use of strength enhancers in combination with a superplasticiser.

The use of superplasticisers which resist the mill ambient conditions and maintain the plasticising effect despite storage in alkaline conditions was pioneered by Sika.6 Nowadays this approach is recognised and increasingly applied in practice for the production of portland-limestone cements (see Figure 4).

Figure 4: The workability is essential for the market acceptance of new cements. Low slump can be improved with PCE in the cement additive. 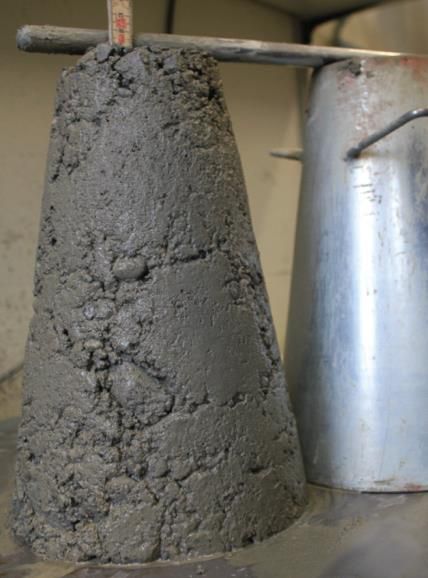 It is well known that portland-limestone cement tends to high cohesive resistance, due to the attraction forces between the fine limestone particles. This can hinder the discharge of trucks or silos because solids can generate stagnant zones.

Many empirical test methods such as the angle of repose, the comparison of bulk density or the packset method7 have been developed to quantify the flow properties of cement. The pack-set index provides a numerical value to control the force required to overcome the vibration-induced consolidation. The test is an aid to routine control during cement production and is not suitable for specification purposes. The higher the pack-set index, the lower the powder flowability.

The awareness of the characteristics of PLC demands a test device which measures clearly defined physical properties. The ring shear tester8 provides defined measurements of the flow properties which are helpful for the development of new cements and the design of silos. In the ring shear tester, the cement sample is contained in an annular shear cell (see Figure 5). A vertical load FN is applied through a thin loading rod on the lid. To shear the sample, the cell rotates relative to the lid (direction ω) and the torque necessary for shearing is determined from the forces F1 and F2 acting in rods fixed to a load beam. 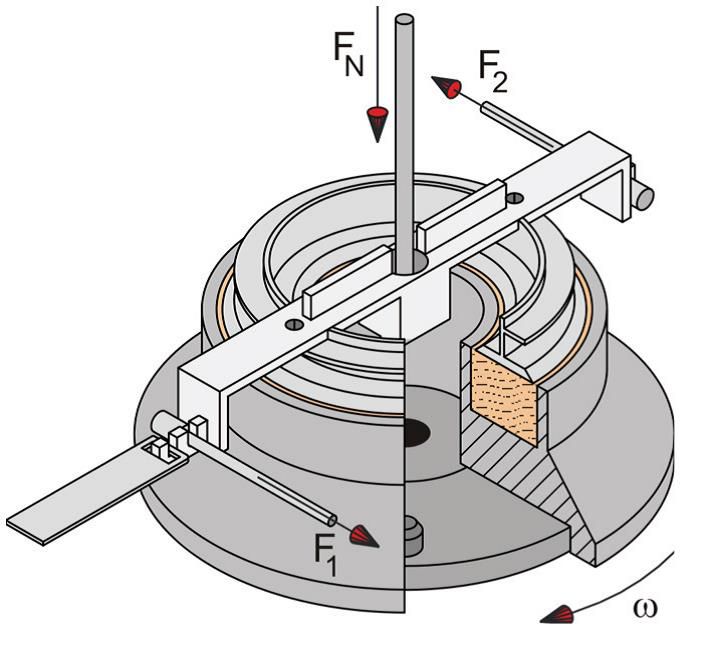 It is definitely possible to regulate the powder flowability of PLC by cement additives that contain polycarboyxlate ether (PCE) as part of an innovative formulation (Figure 6). Care must be taken to apply the correct dosage. Since the PCEs are very powerful dispersants, the powder flowability can become too high, with negative consequences for instance when cement transport on inclined belts is necessary. The dust load in the grinding station or the capacity of the filter bags can be another limiting factor. The content of PCE in the formulation of SikaGrind can be tailormade to optimise the flow properties. 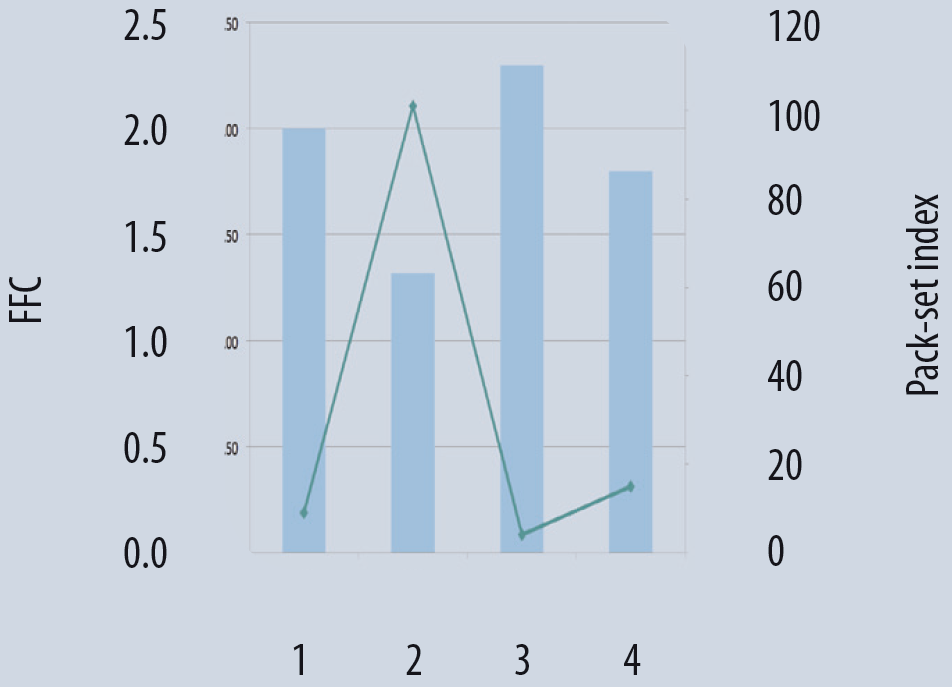 Figure 6: SikaGrind-870 (PCE-containing strength enhancer) increases the flow properties of cement. The cement samples were prepared in a laboratory mill with constant grinding time, therefore also the fineness increased with the use of SikaGrind.

The German association of cement producers initiated a research project with the aim to determine the effects of the particle size distribution on the properties of cements containing limestone and the concretes produced using them10, 11:

A cement plant produced four PLCs with identical constituents in a ball mill by intergrinding. All cements had a content of 30% limestone. The parameters of mill and separator were adjusted to produce different cement surface (Blaine). An identical concrete mix (cement = 300kg/m3, w/c = 0.60) was used to produce cubes which were subjected to the freeze-thaw test according to CEN/TS 12390-9. The concrete must have less than 10% loss of weight after 100 cycles to fulfill the requirement of the standard. Although the cements N°1 and 2 had a significantly higher surface area according to Blaine they did not comply with the requirement whereas cement N°4, with lower Blaine, achieved the target.

The scaling level does not correspond with Blaine, but the particle size distribution of clinker and limestone is essential.

What is the contribution of SikaGrind to durability?

Tailor-made SikaGrind for PLC are very efficient grinding aids. The tendency of limestone to agglomerate is extremely well reduced by SikaGrind, therefor the share of limestone in the segment of very fine particles is reduced but the fineness of the clinker increased. In this way SikaGrind helps to reduce porosity and chloride diffusion which is an important factor to avoid pitting corrosion. Besides, SikaGrind performance enhancer for PLC improve the workability of concrete – a further positive impact on durability as it avoids the formation of e.g. honeycombs in concrete.

Figure 7: Freezethaw resistance of PLC with different PSD. Blaine is not the decisive factor. 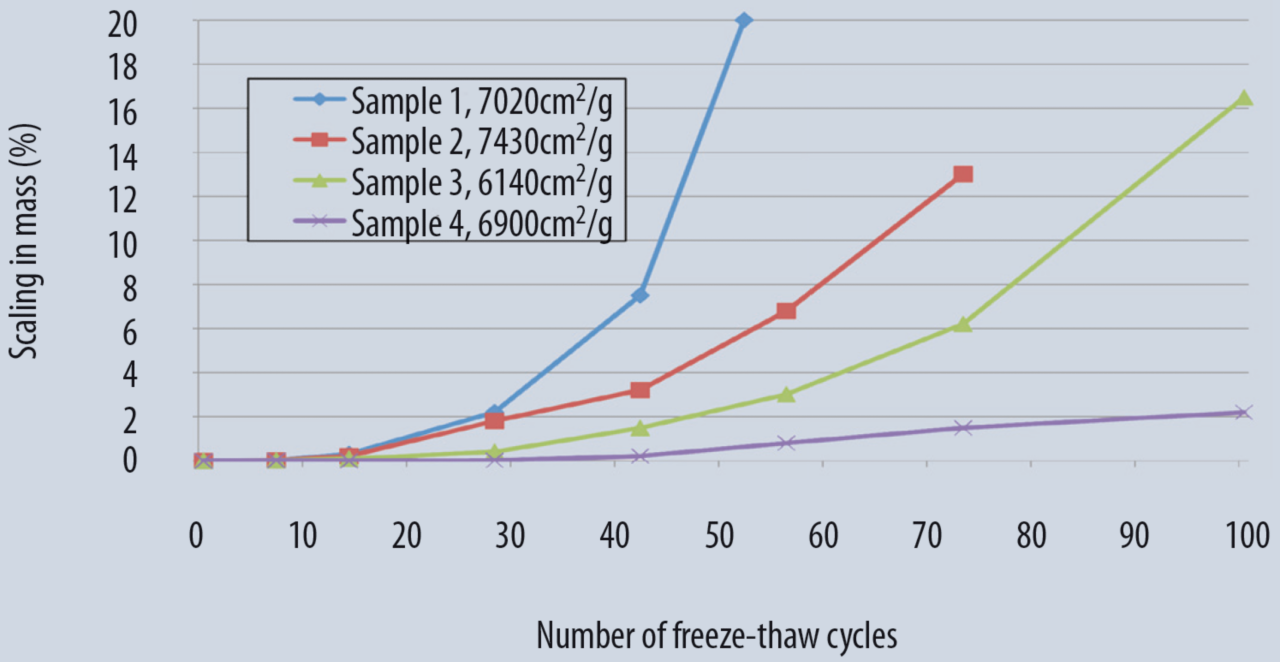 The strategy of SikaGrind LS is to compensate the strength loss with strength enhancers as far as it makes sense and to additionally increase the surface area. Eventual impacts of the higher surface on productivity, powder flowability or workability are reduced by SikaGrind LS.

Practical experience and results of research are in line with the current trend to portland-limestone cement. Ecological and economical aspects make limestone the most interesting secondary cementitious material. At a certain content of limestone, its positive influence turns and the mechanical strength, the cement powder flowability as well as the durability and the workability of concrete are negatively affected.

Cement additives can be helpful to overcome these issues, but the benefit of strength enhancers is limited. Performance enhancers such as SikaGrind LS can extend the content of limestone in PLC, due to their impact on cement properties and cement production. 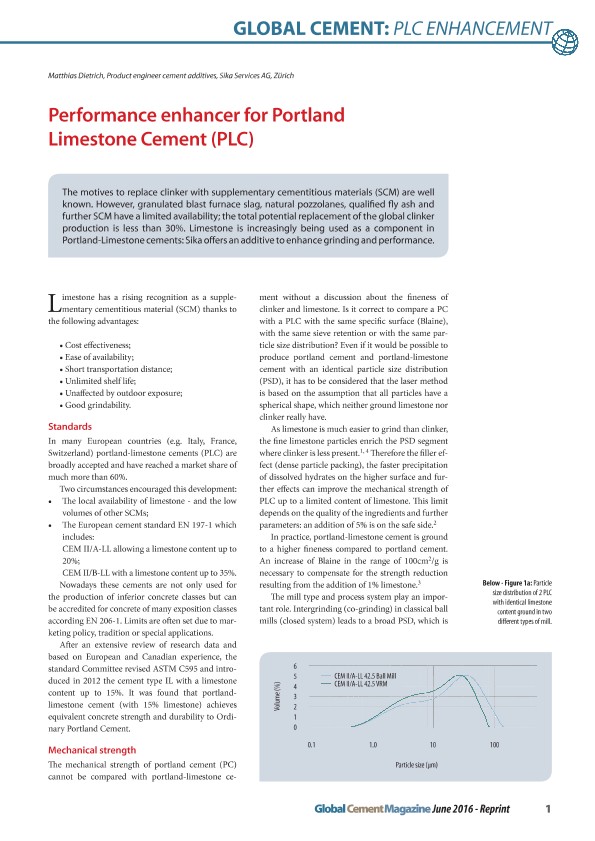 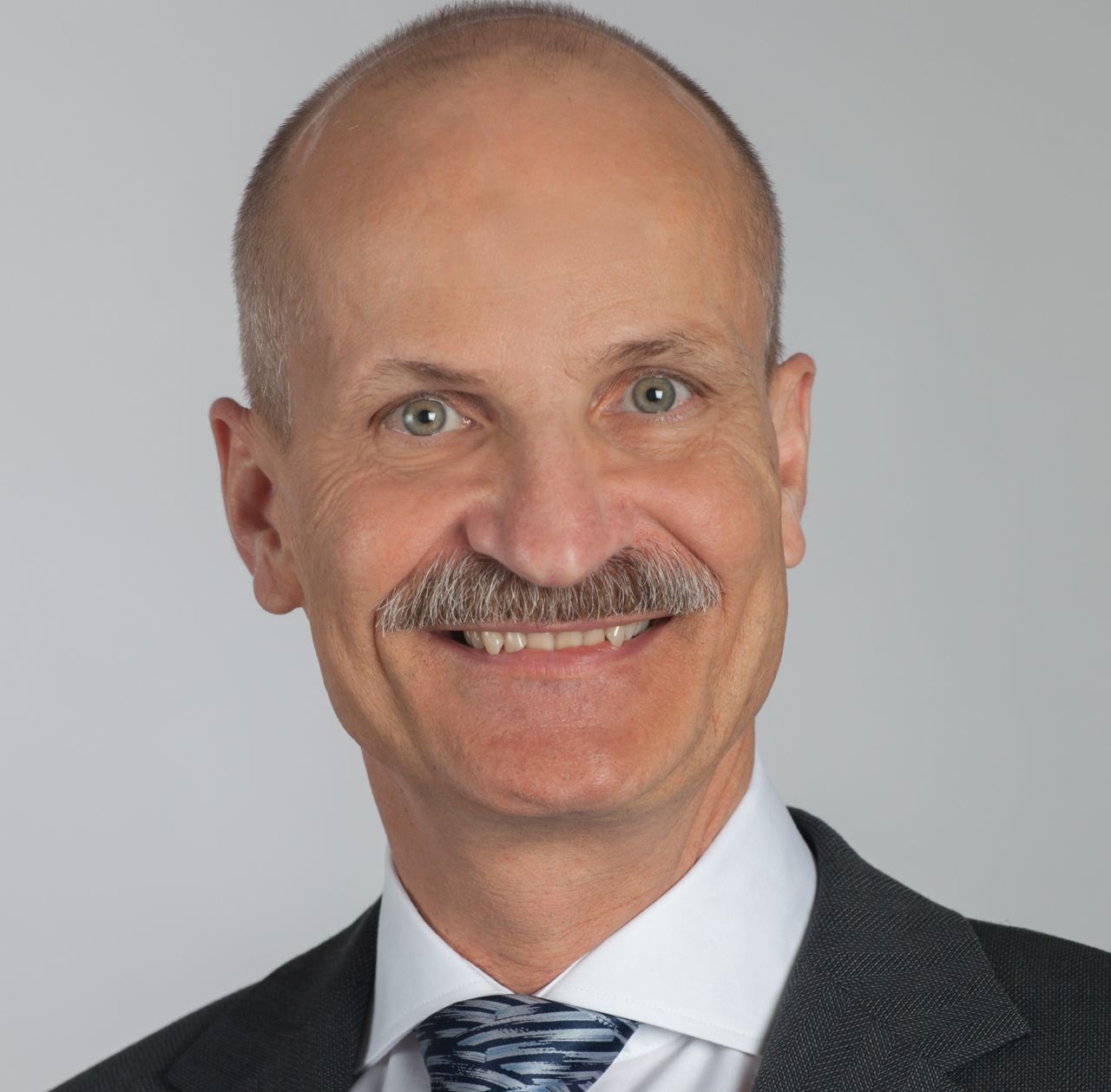